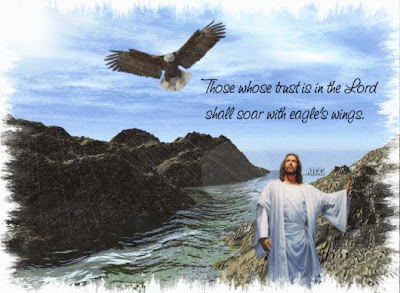 We lived out by the river for a while and one of the most awesome things about that was each year the majestic bald eagles would gather and roost in the trees across the river.  Sometimes 30-50 of them!! I was so facinated by them that I went out and bought some binoculars so I could watch them up close!  They were amazing as they sat in those trees so "stately" with keen eyes watching everything around them.  Then all at once one would take flight and soar high above the trees, then just as quickly, would dive down to the river and in a split second snatch up it's prey soaring once again up into the heavens and back to it's stataely perch in the tree.
The eagle's keen eye sees all around him from his vantage point and then acts at the specific, appropriate time. His timing is perfect as he sees it. One thing I noticed with the eagles as I watched them was that they really did not seem to fly.  They would soar!  There was not much flapping of the wings like you see other birds doing to take flight.  The eagle in one slow, delicate move mastered the air, took flight - up, up, and away with very little movement of the large outstretched wings.  They seemed to float higher and higher with just a tilt of the wing.
The dictionary says to soar is: "to sail, fly or hover in the air at a great height; without loss of altitude; to move upward; to ascend to a higher more exalted level; to rise to a majestic stature".   That is exactly what I saw as I watched those eagles across the river as they took flight and would "soar to the heavens" and back to their perch high in the tops of the trees.  Very seldom were they "on the ground".
To soar with eagle's wings . . . I can't imagine the sights, the sounds, the view from above!  But I do know that I can put my trust in the Lord and know that His keen eye sees all, hears all, understands all, and knows all. I can trust Him to take me to (& through) great heights - without loss of altitude!!  He can and will help me move upward to a new level.  My feet may not get off of the ground but my heart and soul can rise to the heavens above where I can soar like the eagles in God's great grace, love and mercy.  Trust in the Lord and we shall soar . . .
Posted by Diana at 6:53 AM