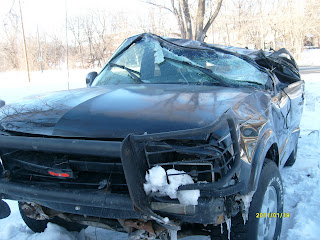 
Last Saturday my daughter called me from the emergency room at about 1:45 am. She was so upset that the nurse finally took the phone and told me she had been in a car accident and she had broken her arm - could I come up to her.  What mother would say, "no"?  I jumped out of bed, dressed and headed for the hospital as quickly as I could.  When I got there, she was being X-rayed but the nurses came in and told me the ambulance had brought her in around around 1:30 am. They proceeded to tell me that she had been in a car accident and had rolled her car two times. She had hit some ice and went through the guard rail and off the interstate. At that point I just wanted to see my first-born child and hold her.  I waited for what seemed like hours.  All the time imagining all sorts of things!  (It is a mother's nature to worry about our children, isn't it??!!) Finally, they wheeled her into the room.  My "baby girl" was upset, hurting, crying, etc. I could tell her arm was broken just by looking at it!! They continued checking her over and finally about 6:00 am wrapped her arm to give it some support and were concerned about her ankle as well.
She began telling me what had happened. It had warmed up Saturday and was slushy and by midnight it was starting to freeze in spots. As she recounted swerving back and forth, hitting and flying over or through the guard rail, the thumps of the car rolling over, the airbag engaging - knocking her contacts out of her eyes, feeling around for her phone in a car full of snow, realizing her arm was broken, trying to climb over the console to get into the passenger seat, then feeling trapped when the door would not open, waiting and wondering how she was going to get out, not being able to find her cell phone, knowing she would have to climb up a steep embankment to get back up to the interstate!!! So many thoughts going through her mind.  Trapped, no phone, can't see, hurting arm - what was she going to do????  Just then some guys came running over and tried to get her out but couldn't.  Police, ambulance, fire truck all came and finally pried open the door and the ambulance rushed her to the hospital. What an awful experience for any of us!
Have you ever been in a situation like that - where you didn't know what you were going to do?  How to save yourself?  Thank goodness for the police, ambulance workers, men that stopped to help! And then for all of the nurses and doctors!
All of this happened early Sunday morning around 1:00 am.  She finally went into "emergency" surgery for her arm at around 8:00 pm that night and was once again wheeled into her room at about 12:45 pm.  I "tucked" her in and drove home tired and weary after being at the hospital nearly 24 hours straight. But thanking God for giving the doctors knowledge and skill to put two plates on each of the two broken bones in her arm and therapy on her ankle, and a God that was watching over the whole event with His protective hand on her!

So many times I have looked back on my life and my family's lives and realize that God had His protective hand on us.  Sometimes I have felt His presence right there through the situation and other times I realized that He was there all the time - even when I started to doubt!!  Shame on me!!! 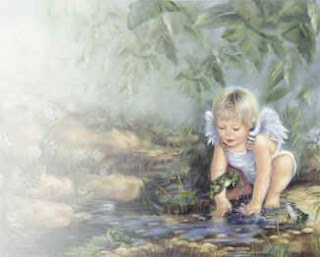 I wrote this last year at the time of Liz's accident!  But I am just now putting it in my blog.  It brought back with it many reminders that God Is In Control of our lives.  I pray and trust that God does just that very thing to each of us to remind us that He is still HERE!  Whether it is with conviction of heart or a pleasant hug - Lord, let each of us feel your touch in your way for the days that are ahead of us.  Let us know you are here and let us look to you for the grace and mercy to see us through.  Send your guardian angels down to us and let us take hold of them and know we are being looked out for.  Even when we don't know it - let us feel your touch again and again.  Thank you, Jesus!
Posted by Diana at 12:09 PM