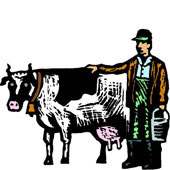 A farmer went out to the barn to milk his cow.  He sat down and began milking when he noticed a bumble bee flew into the barn.  He kept on milking but carefully watched the bee.  To his surprise it flew right into the cow's ear.  Thinking it was going to sting the cow, he prepared for action!  But nothing happened - the cow just stood there chewing her cud, so he continued milking. Then, much to his surprise the bee came out as he milked and landed in the milk bucket . . . .
. . . which I guess is where the phrase "in one ear and out the udder" came from!!!
Posted by Diana at 6:26 PM