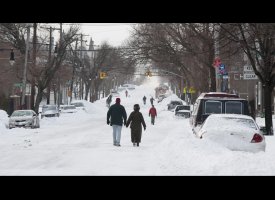 Blonde Joke:  Due to the recent snow storm the news was alerting everyone to park their cars on the odd number side of the block for 24 hours so the snow plows could plow the streets.  The next day they needed to park them on the even number side of block.  It snowed again the next day and the "blonde" is listening to the news to see where she should park her car now and the electricity went off.  She was so upset she wanted to know where she should park her car now.  Her husband finally suggested that she just leave her car parked in the garage!!! (HA! HA!)

We recently had had a similar snow storm. We even received emergency phone messages telling us which side of the street to park on for the next couple of days. My neighbor tried to tell me it was the opposite side of the street first - I didn't think that was right but he insisted.  I went back into the house and listened to the phone message again and sure enough it was the odd numbered side of street the first night.  So I left my car parked on the odd side even though my neighbor kept telling me I needed to move it to the other side! I guess he finally figured it out but he didn't want to admit it!

Do we ever make more out of things than we need to - like my neighbor or like the "blonde" lady parking her car on the even and odd sides of the street when she had a garage!  She didn't even need to park on the street. She had a garage to park in where her car would be inside out of the weather - protected from all of the winter elements!

How many times have I insisted on doing what "I" thought or felt needed to be done without first listening to God's Majestic Voice?! Or, I have listened to what others were telling me instead of hearing God's Almighty Voice!  The book of Job talks about listening and hearing the thundering of His Voice as God sends it forth under ALL of Heaven!  (Job 37:1-6)  Wow!  How could I possible miss it? And yet there have been times I have done that - totally missed it in my attempt to park my car on the right side of the street during the "snowstorms" of my life.  "His Voice roars and thunders marvelously - and He does great things which we cannot comprehend" (Job 37:5).  Did you catch that?  Great things!!!

Are you going through a "blizzard" or a "snow storm" or a "winter weather watch"?  Just as the TV and radio broadcast storm instructions, stop and listen for "God's Majestic Voice".  Listen to the thundering of His Voice and KNOW that HE WILL DO GREAT AND MIGHTY THINGS that we cannot comprehend if we will turn to Him and Trust him just as Job learned to do.  Job 37:6 says, "For to the snow He says, fall on the earth" . . .  Sometimes God uses these winter snow storms to stop everything around us so that we may listen and recognize the work of God - His great things that maybe we would not see unless we were in the middle of a snow storm.